Home. It’s where they have to take you back. In food terms, it’s where you grow, gather, catch, shoot, or otherwise scavenge your sustenance, and in this regard, the closer to where you lay your head down, the better.

A couple of years ago, I was visiting the home I have left behind: the place where I grew up, down close by the river — the little town that time forgot and the decades cannot improve, as Mr. Keillor puts it. It was summer — a typical broiler — and there, in a corner of a cement parking lot at the abandoned Cedar Mall, was a fresh-faced young lady selling sweet corn off a flatbed truck. The price for a dozen ears was a fraction of what I pay in the

Pacific Northwest, where the climate — not to mention the soil — is less conducive to growing sweet corn. I asked the young lady if the corn was local, this being the early part of the season. “No,” she replied apologetically. “This corn is from Rochester.” For those of you without GPS devices, Rochester is a scant 40 miles from my little town.

With fried walleye on the menu (compliments of my Uncle Paul), a bag of fresh corn was certainly a welcome addition. It’s tempting to fancy up sweet corn by roasting it on the grill — skillfully removing just the silk and soaking the ears, still in their husks, in a saltwater brine — or by slathering on a fancy lime-cilantro-chili compound butter, but on this night, it was fine to simply boil the cobs in salted water, roll them in butter, and serve them generously seasoned with salt and pepper.

The point here is one frequently made in the culinary world these days: eat close to home. Can that concept be taken to a ludicrous extreme? Yes, it can. The foodie haven of Vancouver, BC, a few miles up the road from my new little town, is home to a growing clique of chefs who pride themselves on serving nothing sourced farther than 100 kilometers from Robson Street. While this may be politically correct, it is the culinary equivalent of asking Usain Bolt to participate in a three-legged race. Olive oil, anyone? How about arborio rice?

Still, the point is taken. While I am less engaged by the undeniable political benefits of eating locally and seasonally, I am on board whole hog with the culinary advantages. Take, for example, the humble salad. Every grocery store, from Kroger to Dean and Deluca, features fancy lettuce greens these days, washed, bagged, and ready to eat. You can buy spring greens (in the middle of winter), “Italian” herb greens, butter crunch, red leaf, endive, baby romaine, arugula, and stuff I have never even heard of. And while I’m sure it’s all well-intentioned, none of it can compare to the leaves of lettuce I pluck nightly from my little garden plot. To be sure, they are dressed with extra virgin olive oil (that traveled thousands of miles for my benefit) and some fresh lemon juice (all the way from the Republic of California), but it’s the greens themselves that star in the show — not because I grow better lettuce than anyone else, but simply because I can eat it within minutes of picking.

I am admittedly blessed that my “new” home (since 1990) is one where I can enjoy a veritable bounty of seasonal foods that often rise to gourmet heights. For example, this being 2013, Puget Sound is about to be invaded by literally millions of pink salmon, an anadromous fish that runs here in odd-numbered years, strangely enough. Pinks are not a particularly popular species, from a gourmet perspective. They deteriorate quickly once hitting fresh water and do not transport well. Mostly, they are smoked or canned. However, I once had a screaming-bright saltwater pink, served sashimi-style and topped with a bit of pickled sweet onion and fresh mint, that was out of this world. Add to this that they will readily take a fly fished near the surface, and this angler/cook is on board. Think Pink in 2013!

It’s also Dungeness crab as well as halibut season right now, both of which you can take to the bank. But those are no-brainers. Less well regarded would be something like the amazingly fresh slab of Columbia River sturgeon I picked up the other day, which was marbled in fat like a goose on its way to foie gras. With some Midwest friends on site, I 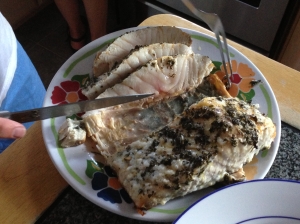 painted the sturgeon with a lacquer of olive oil, lemon, green garlic, and fresh oregano, then roasted it on the grill to medium. The fish was meaty enough that it could be carved like a prime rib roast. This we ate with a nice Greek-ish salad of orzo, feta, cucumber, onion, and tomato, herbed with parsley and mint. Sticking with the Greek theme, we had pita and homemade tzatziki for an appetizer, along with fresh local veggies for dipping.

It should be clear by now that while I like my ingredients to come from close by, my influences in terms of preparation are flung far. In any given week, my foodie goggles look to Vietnam, Spain, Italy, Sweden, Szechwan, Scotland, or southern Minnesota. It’s also worth noting that the two places I have visited recently where I have felt instantly at home — Scotland and Spain – are both culturally quite distant from my Lake Wobegon. Still, I could not have felt more welcomed or at ease than I did, in large part because the way they eat in both countries made utterly perfect sense to me.

I’ll single out Scotland in particular because it gets a bad rap as the home of haggis, while in reality, their produce is peerless. The weather bites, but the food is incredibly delicious. While there, I ate enormous breakfasts of black pudding, pan-fried tomato, and toast, or perfect scrambled farm eggs piled on a California king-size bed of shaved Scottish smoked salmon. Dinners featured medium-rare roasted lamb or Highland beef.

One morning, the chef at our inn pulled me aside and whispered that he had just procured three spiny lobsters from a fishing friend, and if I would like, he would save them for us. 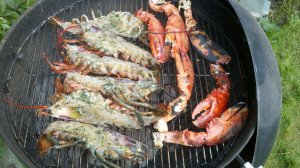 Would I like? Silly man. They were out of this world. Is it any wonder that I felt absolutely at home the moment I stepped off the train in Glasgow? After all, my bloodstream carries at least a few drams of Scottish essence.

So while I like to eat as many ingredients as I can from as close to home as possible without being overly compulsive, it’s important to me from a preparation standpoint to get the hell out of Dodge on a frequent basis. If you have the time and the means to literally do so, I heartily recommend it. My own infrequent forays to places requiring a passport for entry have been among the most culinarily inspiring things I have ever done. Unexpectedly, the best inspiration hasn’t come from the drop-dead incredible, over-the-top experiences I have had by the courtesy of showboating chefs. Rather, it has come from things like the humble pinxto, a rustic boar stew, or a split lobster, simply grilled over wood and with a squeeze of lemon. You know, that old stuff. Pack up that passport and hit the road, Jack . . . if not for real, then at least in your kitchen.

Juice from half a lemon

Simply mix these ingredients and enjoy a dozen different ways, as a dip for raw veggies or toasted pita triangles, on a piece of fish or lamb, as a dressing for crisp lettuce greens, whatever.

*mint turns black if it is chopped to hard or fine.  To avoid that, remove leaves from stem, stack them on top of each other and then roll them up lengthwise, like a cigar or

other smoke of your choice.  Cut them thinly (and gently) on the bias so they come out as thin threads.  Your mint will stay bright green and add a fresh taste to the tzatsiki.

My name is John Idstrom and I write Meezenplace, which is an intentional misspelling of the french cooking term Mise en Place. I am a non-indiginous, invasive species who lives and writes by the beaches of Monterey Bay. I used to think Meezenplace was about food, and maybe it was at some point. Now it's just stories I find that have food in them. Pull up and chair and join me for a meal.
View all posts by John Idstrom →
This entry was posted in Uncategorized. Bookmark the permalink.