When Numbers Get Serious

As it happens, I was running the numbers the other day, as I am prone to doing. Maybe you’re not like me, but I am, and when the numbers start running, it’s hard to get them to stop. For example, I once ran the numbers on how high the fines would mount if I were

caught and cited every time I played off-leash fetch — which is against the law in local parks — with my beloved Labrador Roy. My annual bill added up to $325,000. Today, that amount is now approaching a cumulative $3 million. That he is worth every penny is beside the point.

The equation that burrowed its way into my brain the other day was equally discouraging.  Regular readers of this blog know that I crossed the half-century barrier some three years ago and am now rapidly reaching an age of three score. I’m no Christian scholar, but if memory serves, we learned in Lutheran confirmation classes that our biblical allotment of years is something like three score and twelve (that’s 72, for those of you keeping score at home).

Simple subtraction results in a number that gets your attention, or at least mine. In my specific case, the calculus proceeded thusly: even if I get more than my biblical allotment, I probably have, at most, 25 years of serious fishing left. I am talking about fishing big, cold waters, wearing waders, and getting in deep enough to produce a shrinkage effect. Given that I might engage in such expeditions three or four times a year (let’s be generous and call it four), I have maybe 100 angling excursions left in my lifetime. Probably fewer.

And that is when I did a big gulp.

When the equations running in your head reach the result above, it’s time to throw out the calculator and joint up the fishing rod. Regardless of age, none of us have any time to waste. Readers will be comforted to note that my efforts in this regard resulted in quite a stellar 2012. My tally for the calendar year was 110 fish caught on a fly, including the first 11 steelhead trout I have ever caught in my life. When I was a boy and we were getting skunked while trolling Rapala lures behind our Lund boat, my dad would exhort me to “fish harder,” which on the surface seems to be not only a joke, but a contradiction in terms of epic proportions. However, this year I finally figured out what he was talking about. I fished harder. On the down side, I burned through a generous share of my remaining allotment. It’s a morbid thought, but it’s undeniably true.

Still, there are opportunities, even when time is short. When faced with his own imminent demise, Warren Zevon had the epiphany that it was essential to “enjoy every sandwich,” and it comes as no surprise that this is a notion with which I am down. Forget sandwiches; I have thousands upon thousands of meals left before me — even more if I go easy on the empty calories. Hallelujah!

Currently, I might make a really nice meal a couple-three times a week. Even for a foodie like me, most nights (though it embarrasses me to admit it) we eat the current-day equivalent of sloppy joes and frozen pizza. An intentional effort even two more nights a week stands to double my cumulative culinary output. This takes little more than a few minutes’ thought for the most part — just the time required to make sure that I have the right ingredients on hand and a recipe in mind. In commercial kitchens, they call this “getting your ‘meez’ together,” as in your mise en place. While squeezing in two more fishing adventures a year would be a near impossibility (barring an unlikely relocation to Craig, Montana), two more good meals a week that require little more than a few minutes’ thought seems doable.

I struggled to come up with a recipe that directly relates to our Topic of the Day, so forgive me if this has a pulled-out-of-the-hat quality to it. For years, I attempted to cook steak in the Florentine style, with unsatisfying results. I figured it was because I was using the wrong kind of cow. That was part of it, but not the whole reason. It took a trip to 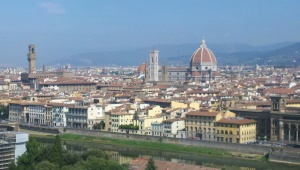 Florence to set me straight, a practice I highly recommend when you find yourself stuck. Steak Florentine is simply good-quality steak, salt, pepper, and lemon juice, and it is usually served with one of my favorite side dishes, garlicky wilted spinach (again with the lemon). My mistake was in squeezing on the lemon prior to grilling, which resulted in a steak that tasted pretty much like my non-Firenzian efforts.

In Florence, they prepare and serve steak dinners differently. High-quality beef (they will tell you theirs is somehow special and not found anywhere else on earth — yawn) is grilled to medium rare, cut into strips, and served at the table mounded on a platter. Quantity is determined not by steak size, but by the number of individuals who will be eating. The essential lemon is squeezed on the sliced meat at the table, not prior to cooking. This results in a remarkably bright dish with flavors that leap like Carl Lewis off the palate. The acidity of the prominent lemon flavor is a perfect foil for the rich, fatty-flavored beef (apologies to my veggie and vegan friends; I know this grosses you out).  Psychic balance is obtained by eating a reasonable, human-sized portion of meat, as opposed to finishing off that 12-ounce New York strip yourself, not to mention the accompanying spinach side.

Prepare a hot grill, either gas or charcoal (the latter is preferred). Keeping the steak whole, season it liberally with salt and pepper. Let it rest an hour at room temperature. Sear on the hot grill until medium rare, three to four minutes per side. Watch them cook — don’t go in and watch the ballgame. Once cooked to desired doneness, remove from the grill and allow to rest on a warm platter for five minutes. Cut into strips against the grain (on the bias, if you are fancy). Squeeze fresh lemon over the cut meat. Serve immediately.

This dish cooks fast, so if you have your meez together, you can make it while your cooked steak is resting.

Clean and pat dry a good amount of fresh spinach (it is amazing how much spinach cooks down, so use a lot). Sauté chopped garlic in a large non-stick pan with a modest splash of good olive oil for about 3 minutes. Add the spinach and cook until just wilted — maybe two minutes, max. Salt and squeeze on lemon to taste. Serve immediately.

This simple but elegant dish deserves a special wine: a super Tuscan if you have the dough, or perhaps a Barolo or a Barbaresco from the Piedmont region. Regardless, this is the time to go large and red.

Today’s musical selection could well have been “Powderfinger” by Neil Young, quoted at the top of this missive, but I have chosen instead this selection by the great and underappreciated James McMurtry:

My name is John Idstrom and I write Meezenplace, which is an intentional misspelling of the french cooking term Mise en Place. I am a non-indiginous, invasive species who lives and writes by the beaches of Monterey Bay. I used to think Meezenplace was about food, and maybe it was at some point. Now it's just stories I find that have food in them. Pull up and chair and join me for a meal.
View all posts by John Idstrom →
This entry was posted in Uncategorized. Bookmark the permalink.

3 Responses to When Numbers Get Serious